In the second tutorial of our Divide and Conquer Algorithms series, we will analyse the Quick Sort algorithm. Before moving forward let us formalise the input/output of our algorithm.

We have already discussed the Divide and Conquer approach, which gives us three stages of the algorithm i.e. Divide, Solve and Combine. So let us analyse the stages one by one in Quick Sort algorithm.

So what is pivot? In lay terms, pivot is a point where a rotational system is pinned down. So, the whole system may move around, but pivot point stays at the same place. The analogy is almost exact here too.

Pivot is an element which is in the exact position after the array is sorted.

Basic Idea for the pivot is to partition the array such that, for some index j as the pivot 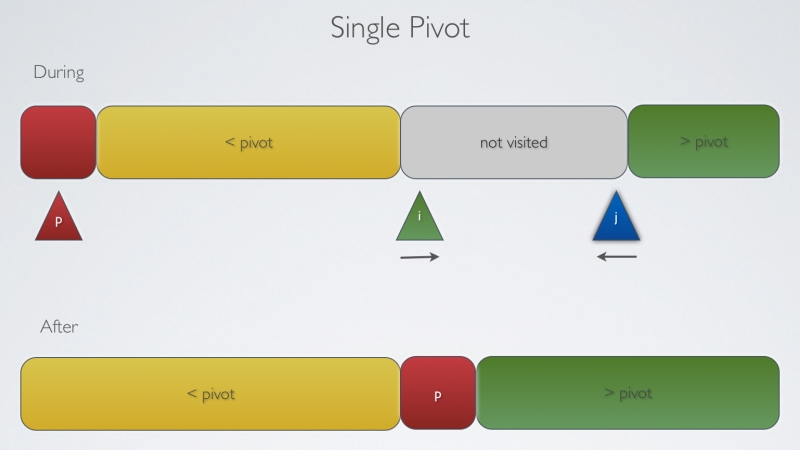 Phase 1: Repeat until i and j cross. 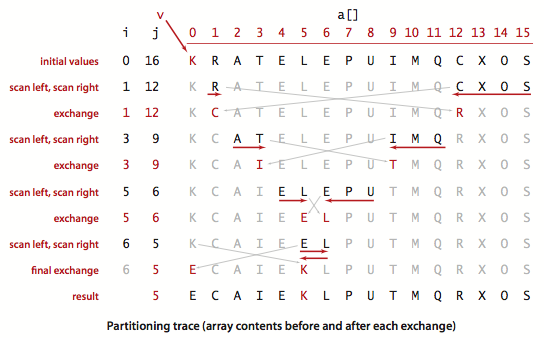 Now the third step should be The Combine Step. In Merge Sort, this step was crucial as individual problems were sorted individually but overall they were largely unsorted. So we needed a mechanism to put them together in sorted order. But in the quick sort algorithm there is no need for this. Notice that in the partioning step, we find an element and put it in it's proper position. So, by the time we are through with the partition step and reach our combining case, we need not do anything as all the elements have been placed in their respective position and are where they should be in sorted array.

For completeness, the following is one implementation:

We have already seen that the most crucial step of this algorithm is choosing a pivot. So, if we want to think about the worst case we should focus on choosing the pivot such that the partition is unbalanced. As we are taking the first element as pivot and for this case assume that the array is reverse sorted, what might happen?

In this case, we would have to move all the elements to the left side of pivot as it is the largest element in the array. Let us take an example:

Now \(i\)will move forward and compare all the elements with pivot until we reach the end of array leading to \(N-1\) comparisons. Now \(j\) will move backward but will encounter a smaller element than the pivot and will stop, leads to \(1\) comparison.

So in one partition routine, we will have \(N\) comparisons for input size \(N\) .

After this step, one array would contain 9 elements and another array would be empty. Now this N - 1 element array will also take N - 1 compare and switching. If we sum it up it leads to

Average case:
On an average Quick Sort complexity is \(O(NlogN)\) and in fact, it takes 39% more comparisons than Merge Sort. But, it is faster than Merge Sort in practice because of less data movement. So, how to avoid the worst case? use random shuffle (we will talk about the average case more in the another tutorial)

Estimate the true median by taking samples of 3 random items.